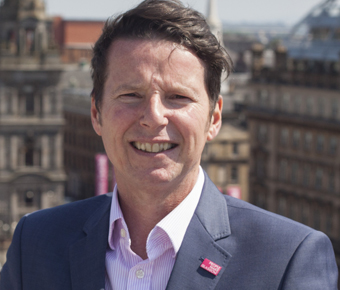 Richard was educated at the University of Ulster where he obtained a BA Hons in History / Sociology and followed this up with an Msc in Marketing at the University of Manchester Institute of Science and Technology. Richard's first job was as a Postgraduate Teaching Assistant at Oxford Polytechnic and moved back to Scotland to work as a Marketing Executive for a Kit Campbell Associates a leisure and sports marketing agency in Edinburgh.

He spent 6 years working in a variety of roles including project management at the economic development agency, Lothian and Edinburgh Enterprise Ltd and then moved to LEEL's sister agency, the Glasgow Development Agency as the Project Manager for the creative industries including working with companies involved in the film, television and design sectors.

A switch to the private sector followed with a move as Marketing and Business Development Manager at 1576 Advertising Ltd in Edinburgh and 18 months later became Marketing manager for Radio Clyde in Glasgow. Richard spent over 8 years as marketing Manager before being promoted to Marketing Director for both Radio Clyde and Radio Forth, both market leading radio stations in their respective areas. Richard joined the Glasgow Chamber of Commerce as Commercial Director in December 2009 and was promoted to Deputy Chief Executive in July 2012.

He lives in the Trossachs and has a passion for sports, outdoor pursuits, travel and Spain and tries to indulge as often as possible.