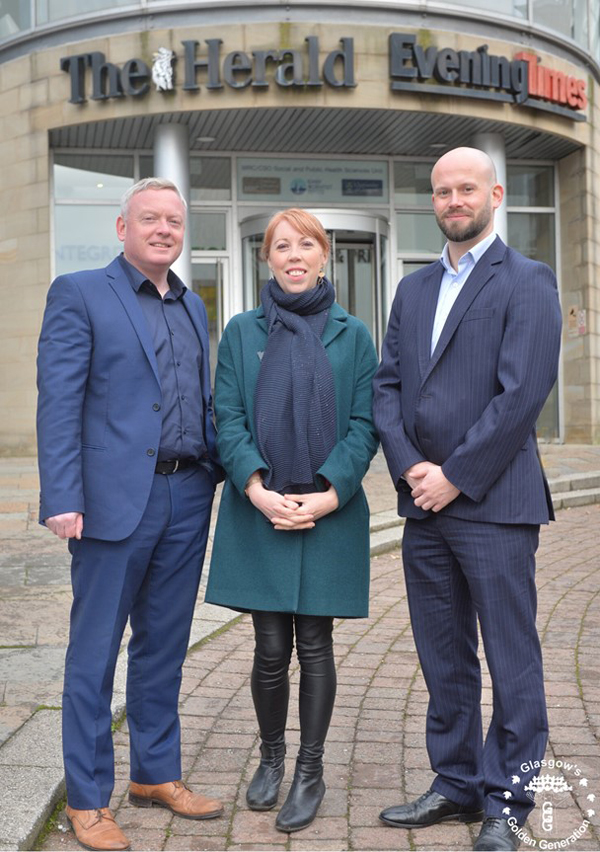 Glasgow’s Golden Generation is proud to announce an innovative partnership with Newsquest Media Group - publishers of The Herald and Evening Times - as part of the Think Dementia campaign for 2019/20.

GGG has seen a dramatic increase in service users who are affected by dementia in the last ten years.

Henry Ainslie, Assistant Editor at The Herald, said: “Dementia is the biggest public health issue facing Scotland and it is time for action from our government and healthcare system.

In its advanced stages it requires specialist personal care which comes at a significant cost for those living with dementia and their families – they should not face the additional worry of having to find the cash. This campaign will fight to ensure no family in Scotland ever has to be in that position’’.

"We also want to highlight the importance of proper care for those living with dementia and will shine a light on the significance of identity and dignity for people with the disease’’.

“Our partnership with Glasgow's Golden Generation is crucial to pursuing this action. The success of our campaign - in pushing for change and raising awareness - will be based on the strength of the stories we are able to tell, and the support offered by Glasgow's Golden Generation in connecting us with the people directly affected by this cruel condition is invaluable. The work the charity does in supporting people affected by dementia across Glasgow is incredible, and we are proud to be working with them on this campaign."

Glasgow’s Golden Generation is Glasgow’s leading charity within supporting older adults.  The charity was set up to alleviate loneliness and isolation by providing support, guidance and practical assistance to thousands of elderly people each year through 3 day care centres, a befriending service, a welfare service and weekly clubs.

The charity is set to receive a festive boost through this Partnership as Newsquest will be donating profits from the Times Past Calendar, the Herald and Evening Times’ Christmas fundraising campaign.

Richard Donald, Assistant Director at Glasgow’s Golden Generation, said: "we are delighted to be an official Charity Partner to Newsquest Media Group and contribute to raising awareness across Glasgow of the challenges older adults face while living with dementia.  We are also very grateful to receive funding via the Times Past Calendar 2020 and to be recognised by Newsquest for the vital services that we provide to older adults.  With the help of further corporate support and funding we will continue to grow our services and support even more older adults in 2020’.