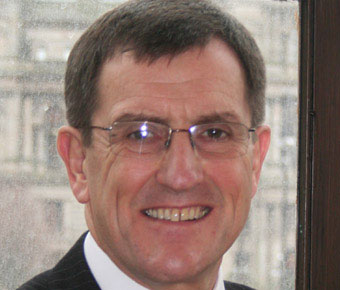 James has a passion for business, loves engaging with people and brings a sense of enjoyment into everything he does. With 40 years experience, he has developed a very strong financial acumen and, this coupled with his energy and commitment helps him coach businesses to grow. It is his firm belief that successful businesses are those that truly focus on their people, on their retention and development and, as businesses grow, recruitment for the future.

He is a Chartered Surveyor and is an independent Business Adviser. Previously he held board positions with Norwest Holst, GA Group (now BAM), Henry Boot and Morris & Spottiswood. At Morris & Spottiswood, one of the largest fit out contractors in the UK, he was CE from March 2004 rising to Deputy Chairman in January 2007 and presided over the Company during its growth from £12 million to £120 million.

James became a Director of Glasgow Chamber of Commerce in January 2006. Invited to join the Board of Management in July 2006 and elected Deputy President in January 2008. President from January 2010 to January 2012. Through the Chamber I have engagement with businesses from all sectors, who are involved in the policy direction for Glasgow. In particular, the continuing business development of Glasgow through the Economic Commission launched end of June 2011. This is the platform for the economic success of the City in the next 10 years. My belief is aligned with The City of Glasgow Council's desire is to provide a real legacy from the 2014 Commonwealth Games creating opportunity for today's youth to gain employment.

James lives with his wife in the village of Houston and in his spare time he is a low handicap golfer and keen curler. He is a passionate follower of the England cricket team and he enjoys cycling, walking and gardening.